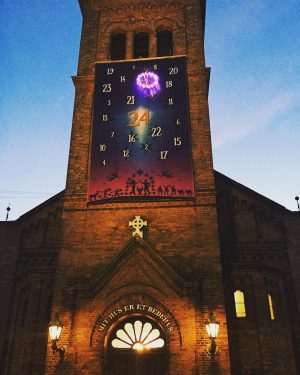 Stefanskirken in Nørrebro displays this huge advent calendar every December. St Lucia Day is actually on 13th December not 9th but I didn’t have a photo of that.

It feels even more important to remember the day this year, not just because we’re away from Denmark but because of the restrictions everyone is going through, both here and Denmark and across the world.

I remember the first time I discovered about St Lucia Day. Lydia was 2 years old, Rich was away at his annual Christmas party in Prague, I was 4 months pregnant with Sofia and had just cycled home from vuggestue (nursery) with Lydia on the back of my bike in the dark. As I passed a church, families were queuing to get in. On the spur of the moment, I parked up the bike and joined the queue to find out what it was about. I had enough snacks for Lydia if it all went pear-shaped I thought, even though it was dangerously close to tea time. So there we sat, perched on the last bit of pew space remaining in Stefanskirken in Nørrebro. The lights went out and a procession of girls all wearing white and holding candles started to sing and glide around the church. They were aged around 10-14 with the older girl at the front balancing a crown of candles on her head. Lydia was totally transfixed. Then there was a short service, of which I couldn’t follow in the slightest. But I later learnt that Santa Lucia was a 3rd century Christian martyr whose name means light. Denmark adopted the celebration from Sweden during the Second World War, to bring light and hope during a dark time. The tradition of St Lucia Day is for girls, usually at school-age to dress in white and sing the St Lucia song, holding candles while one girl wears the candle crown.

After the service, everyone rushed out of the church because a. there were Danish cinnamon cookies being handed out (which by the way are called pebber nodder and are delicious) and b. there were two donkeys on the street outside offering rides for the children. Stefanskirken is a church right in the middle of Nørrebrogade, one of the busiest roads in Copenhagen and not somewhere you expect to find two donkeys. It was so surreal yet amazing. Luckily the cookies were enough to distract Lydia and I swerved the donkeys and headed home at this point. Overtired meltdowns while pregnant solo parenting are not what you want.

So that was my first introduction to St Lucia and here’s the Instagram post I wrote about it that night:

Last year, St Lucia day fell on a Friday. As Lydia was four years old, I thought she might celebrate it at børnehave (kindergarten). Not only was she unaware of the day, but to my horror she came home to put a mirror by her bed and ask for garlic to be put under her pillow. Her pædagog had chosen instead to talk to the children, aged 3-6 about Friday 13th, ghosts and vampires, which sent Lydia’s imagination into a tailspin. I asked my Danish relatives and friends if this was a typical thing to teach in kindergarten and from my limited survey, it seems not. Lydia soon forgot about it all but I definitely did not.

This year, we marked St Lucia in a different way. Lydia’s school teacher asked me how she could involve the class in a Danish Christmas tradition so I told her all about St Lucia. Then last week, Lydia went into school with a bag full of candles (battery ones because this is England) and stood in front of the class to talk about it. Her teacher lit up the classroom with the candles while they listened to the Santa Lucia song. Although I couldn’t be there to see it, just imagining Lydia telling all her friends about this tradition that we learnt during our time in Denmark, makes my heart burst.

This is the child’s version of the Santa Lucia song that was played to Lydia’s class and what you’ll currently hear Sofia and Lydia belting out on repeat, “Santa Lucia, Saaanta Luciiiaa!”.