We have now been back in Sheffield for almost two months. We are finally now into a routine and I have got some head space to write here again.  I won’t pretend that it’s been an easy two months. I was warned by many who had travelled this road, that the transition back to your home country after years abroad is hard – but I definitely underestimated it. Denmark is still very fresh in our minds and as much as I like this, for example Sofia continuing to infuse Danish words with English ones and Lydia singing her Danish børnehave songs; it also makes some things tough. Leona is still Lydia’s best friend and she was sad she didn’t come to her birthday party. Signe is still Sofia’s favourite pædagog and her new nursery teachers don’t quite cut it for her yet. I still picture the bike commute to nursery and the colourful streets of Copenhagen. The fresh memories lead way to direct comparisons but I am trying to do this less. And the girls are happy – it is just an adjustment – but one you add to your own, as a parent.

Anyway, before I write anymore, I’ll save it for another blog post because here is an article I wrote, three weeks in, about the move back. You can also find it on The Local, Denmark – an English news site about Danish news, which I still freelance for.  Lydia has turned five since this article and has started school! 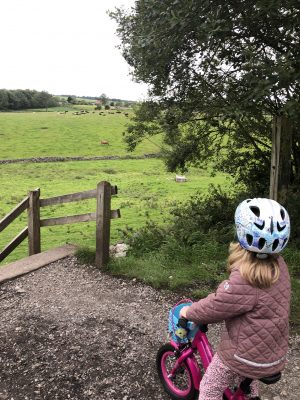 Our cycling views now. This is the Monsal Trail in the Peak District.

Three weeks ago my family and I packed up our Copenhagen apartment and said goodbye to Denmark after three and a half brilliant years. We have returned to our house in Sheffield, England, that we rented out during our time in Denmark. Unlike when we moved to Copenhagen, we know everything here; the area, the people, the culture, how to pay taxes. Yet there is still a sense of reverse culture shock as we embed ourselves back into UK life.

Our Sheffield Victorian terraced house, sitting on a quiet street in the steel city built on seven hills, feels very different from our central Copenhagen apartment where life bustled outside the window on the wide flat open roads. The skyline is different. The people are different.

For one thing, they talk a lot up north in England. It’s the opposite of the Danish reserve. In addition to the fact we can understand every nuanced phrase and passing by comment again, it seems like there’s a lot of chatter around.

The lights in our house are bright. Why did we ever need a main light that shines like you’re under a dentist chair? Having not had a ‘main light’ for over three years, we are definitely converted to the low-setting hygge vibe of Danish living.

We haven’t slept in total darkness since 2016. We either had no blinds or very thin, let-the-light-in blinds, as many Danes do. Now we have black-out curtains and it’s actually led to both our children waking up during the night complaining it’s too dark.

The open-plan living space of so many Danish houses and apartments. This was the first place we rented.

We’ve taken a door off downstairs to make the house feel more open-plan like apartment living. Except it’s a Victorian terrace so it will never be this. But we can try.

Having spent nearly four years mainly hearing ‘mor’ in a playground, if there was ever a shout of ‘mummy’ it was 95% of the time my child. Now I think every “mummy” I hear in the playground is for me. The phrase “be careful” echoes around in a way “vær forsigtig,” the Danish equivalent never does.

I keep saying ‘tak’ and ‘undskyld’ and get taken aback for a moment that the response is in a northern English accent. But at the same time I want to keep saying Danish things automatically, so worried am I that the part of my brain I have trained so hard for the last three and a half years, will start to switch off.

My four-year-old has started taking an interest in road signs because they’re now at her eye level, as opposed to high up on Copenhagen streets. She has also become very excited at the one cycle path in our local park. Bike lanes are such a rarity that I don’t dare to cycle on the busy hilly roads with a child on the back and it’s one of the things I miss the most.  Nothing quite replicates that sense of freedom and joy from cycling in wide bike lanes, in all weathers, with all children and baggage in tow, to get to where you need to be.  It also helps that Denmark is flat.

Courtyard life is something else that can’t quite be replicated. We enjoyed some memorable summer evenings, chatting and drinking with our Danish neighbours, while the children played freely around the courtyard until dusk.

But as each week passes, I am trying to draw less direct comparisons and accept the place I’m now in for what it is; not what I just had. Face masks are a way of life if you want to go to the shops or get public transport and going for a meal involves filling in a track and trace form. I can’t expect to walk through Sheffield town centre and compare it to Strøget, Gothersgade or Nyhavn.

Relocating and becoming an international living in Denmark is one thing. Returning home, it turns out, is quite another. It brings its own set of challenges because you’ve changed. The country you’ve just lived in has left an imprint and returning ‘home’ doesn’t bring the same feelings that it used to. The familiar is somehow unfamiliar.

Relocating from Denmark to the UK during the coronavirus and just before Brexit certainly sounds odd on paper. But there were various reasons beyond this that meant we moved at the time we did. Denmark was never a long-term plan. It was an experience we took while the time was right, so we could discover more about the country my father was born in and learn the language.

We moved out with a 16-month old, three suitcases, a two-month rental and no permanent jobs, to see what we could make happen. Two months turned to six, which turned to a year and my dream of living in Denmark came true.

Lydia aged 16 months ready for our one-way flight to Copenhagen.

Nearly four years and four apartment moves later, we were at a cross-roads.

Whether to move apartment yet again and begin school life in Denmark, entering a longer-phase of living there, or go back to our old house, a job at a family business, two sets of grandparents living nearby, and a local school place back in Sheffield. It was the hardest decision I’ve ever made because a move to the UK means no going back to live in Denmark, not without a lot of hoops to jump through at least. We certainly couldn’t have moved in the way we did, without being members of the EU.

The prospect of Brexit and what that means for my children’s future relationship with Denmark has caused me sleepless nights. The Danish citizenship requirement for nine years residency plus two years processing time was much longer than we would ever have stayed for and having a Danish father unfortunately doesn’t grant me any concession because of my age. Such is the high bar for rooting yourself in the Kingdom of Denmark.

But what we gained from our experience is more than I ever expected. We had another baby, our almost five-year-old is bilingual, I discovered more Danish family and learnt so much about the culture and childhood upbringing. Denmark will never leave us.

Not only have I stocked up on Danish children’s books from second hand shops, downloaded a Danish audio book app, kept Danish on Netflix, bought some Danish design items and enough children’s outdoor wear to get through the next eight seasons. But I have gained a lifetime of memories.

A Danish flag-bearing breakfast after giving birth, a christening in a Danish church, babysalmesang, vuggestue, børnehave, 18 months of language school, friendships, family gatherings, summer house breaks, fastelavn, julefrokost, the children skinning a deer at Christmas, Rasmus Klump hugs at Tivoli, getting soaked on the cargo bike commutes, learning various ways to sing Happy Birthday, my astronomical fine on the Metro, the first time I was understood in Danish, the many times I wasn’t, beach days, smørrebrød, gløgg, nights out by bike.

I threw myself into Danish life and it’s hard letting it go. But I think that’s the key – you don’t have to let it go. My English life is now a Sheffield-Danish one. Bolle med ost (a roll with cheese) will always be the snack that saves the day and I will always call it this. The painting on the fridge that says ‘mor’ will always be for me. And now I have a new community- ‘Danskere i Sheffield.’

Yes, this group actually exists on Facebook and I am proud member number 19. So far we’ve met up with a mum and her three-year old daughter. We spotted each other straight away from the matching termotøj our children were wearing and she even understood my Danish. With so many more to meet and forge friendships with, I know it will help me remember that the last few years haven’t just been a dream. Denmark will be forever with me.