It’s been a big week for Denmark. It was Queen Margrethe’s 80th birthday on Thursday. She’s a very popular and respected royal, whose big birthday celebrations were cancelled due to the coronavirus. So to mark the day, there was a fællessang, where people across the country came together at 12pm to sing from their homes and streets for the Queen, which was broadcast live on DR1. Lydia and Sofia excitedly joined in the Danish happy birthday Queen song…”I dag er det Dronningens fødselsdag, hurra, hurra, hurra!”

The day before had a different feel to it, as Denmark became first country in Europe to start reopening schools and day care institutions after lockdown from the coronavirus. There were still trusty Danish flags waved about, but not with overwhelming vigour, as people anxiously stepped back into life after lockdown.

For this article in The Local, Denmark, I looked at the concerns and practicalities of Denmark’s first stage of reopening. You’ve then probably heard enough from me on the matter, I feel like I’ve spoken about it a lot! 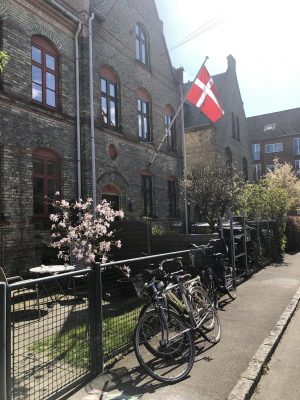 On Wednesday 15th April, around half the country’s primary schools, nurseries and kindergartens opened their doors to greet their children back. But it was not the same place the children had left just over a month ago.

As parents dropped off their children in a staggered approach, the first routine of the day was washing hands. This has to be repeated at least every two hours. There could not be any hugs as friends were reunited and for those in nurseries, many of their usual toys were not there – to reduce the amount of twice daily cleaning. Outside play and learning in small groups is a key part of the day now, along with sitting at desks or tables at a two-metre distance.

It’s an anxious time for everyone involved. I’ve spoken to teachers who although supportive of the reopening, are worried as to how they can meet all the requirements, on top of not getting sick.

“Every time you look around, the kids are touching each other” one teacher told me. “How many times can you tell them off for that?”

The worry is that if children pick up and spread infection, whether that’s a common cold or the coronavirus, there’s a big knock-on effect. Parents, teachers and pædagog (nursery workers) would have to take time off, either for themselves who have become unwell or to look after their own children, leaving institutions without enough staff to keep up with the new guidelines. The government has however pledged extra funding for institutions to employ more staff to meet the extra work load.

So parents are adjusting to a new way of life for their children while others have decided to keep them at home. Many day care institutions, mine included, have asked parents if they can do this because there is no longer a safe amount of space for the children, under new requirements.

Interestingly, 40-50% of parents told their institutions that they needed the space, with the rest opting to keep their children at home, according to the National Association of Local Authorities (Kommunernes Landsforening).

“I definitely think that there are parents that are both unsure and that will just wait and see with time,” says Jacob Bundsgaard, chairman of KL. “I am also pretty sure that more and more parents will see that it is actually a good and safe offer that is being given and who therefore choose to send their children to daycare.”

The vast majority of the 62 municipalities that answered the Kommunernes Landsforening questionnaire have been able to offer a daycare place to everyone who has wanted it. However, the municipalities of Esbjerg, Hedensted, Gladsaxe and Copenhagen haven’t been able to. Parents in Copenhagen and Gladsaxe don’t have to pay while they’re not using day care facilities.

Plans are currently being put in place to try and creatively use other available space and playgrounds, even Tivoli in Copenhagen.

Reopening after lockdown is not an easy task. But the government is confident that Denmark is ready, as the curve continues to flatten.

These figures are better than the government had hoped for – so much so that they’ve announced for more professions to reopen next week.

It’s both welcome and concerning news to many, as Denmark continues to step into the unknown.

Driving instructors have expressed their concerns as to how they can keep at a safe distance from pupils when teaching. Others are also waiting to hear about the guidelines they need to adhere to, in order to reopen safely.

As people start to re-enter life after lockdown, the big question is whether everyone keeps to the health authority instructions of “væsk hænder, nys i ærmet og hold afstand” – wash hands, sneeze into your sleeve and keep a distance. This is what Prime Minister Mette Frederisksen says is vital to the reopening working.

But a new study from Aarhus University shows a decline in the number of people following health authority guidelines. Michael Bang Petersen, one of the researchers behind the study says the decline started when the number of infections started to turn in Denmark.

Only time will tell how Denmark responds to the first phase of reopening after lockdown. The government has said it will take three to four weeks before we see the results.

It’s walking a tightrope, as Prime Minister Mette Frederiksen put it. And Denmark’s nerve and world-renowned trust, is being tested.