Tomorrow, on June 2nd, there will be a second national protest about childcare standards across Denmark. It’s ahead of the general election on Wednesday, 5th June. I attended the first protest, on 6th April 2019, which was the biggest demonstration of its kind. I thought I’d include the article I wrote for The Local, Denmark, giving a bit of background and context to this on-going issue.  I’ll later blog about my personal experience, as I’m aware I haven’t written much about it on here.

Enough is enough, typed Tina Albertsen. I call for action.

The Danish government had just voted down a proposal to discuss standards in childcare across the country.

Tina’s words hit a nerve. Within days, a website and Facebook page had been created and over 30 thousand people joined. The movement, “Hvor er der en voksen?” (“Where is an adult?”) had begun.

Its aim is to persuade the government to introduce a minimum ratio of 1 adult to 3 children in nurseries (roughly 0-3 year olds), and 1 adult to 6 children in kindergartens (roughly 3-5 year olds); a concept termed minimumsnormering in Danish.

There are currently no regulations over staff-to-children ratios in state-funded childcare institutions, which means workers can sometimes find themselves alone with up to 17 young children, according to the union for childcare workers, BUPL (Børne og Ungdomspædagogernes Landsforbund).

This issue was put into glaring view in a documentary, Hvem passer vores børn? (Who is looking after our children?) aired last month by the Danish public service broadcaster DR.

The programme follows two institutions, as childcare workers (pædagoger) go about their daily tasks in the nurseries (vuggestuer) and kindergartens (børnehaver).

During one afternoon at a nursery, we hear how two workers have finished their shift, two have gone on a break, so there are three left to care for the small children – all 31 of them. There’s a cacophony of crying, a child on their own in the cloakroom, toddlers unattended on high stools. Staff are doing their very best, in the face of an impossible task. In the kindergarten, it’s 1pm and there are two workers watching over 44 children playing outside, all under the age of six.

Following the documentary, parents and childcare workers began to tell their own stories on the parent movement’s Facebook page and later across Danish media.

Stories emerged of children being collected in wet clothes, nappies left unchanged, unanswered questions about their child’s day. Workers told of being unable to hug upset children, ending up on sick leave, or leaving the profession completely.

“It’s a very sensitive matter. It’s our children. It’s not about criticising the caregivers but about the funding,” Marie Blønd, one of the leaders of the movement, told The Local.

“Now people have actually started talking about it and saying, ‘oh, it wasn’t just me’,” Blønd added.

Last Saturday, just three weeks after that first Facebook post, protests took place at 57 locations in Denmark. Thousands of people attended with prams, cargo bikes and banners, asking for those minimum standards to be put in place. 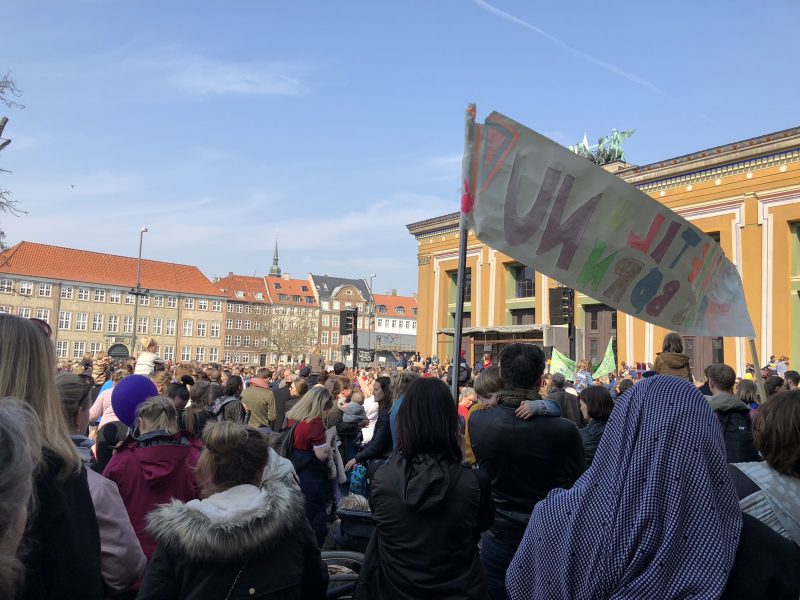 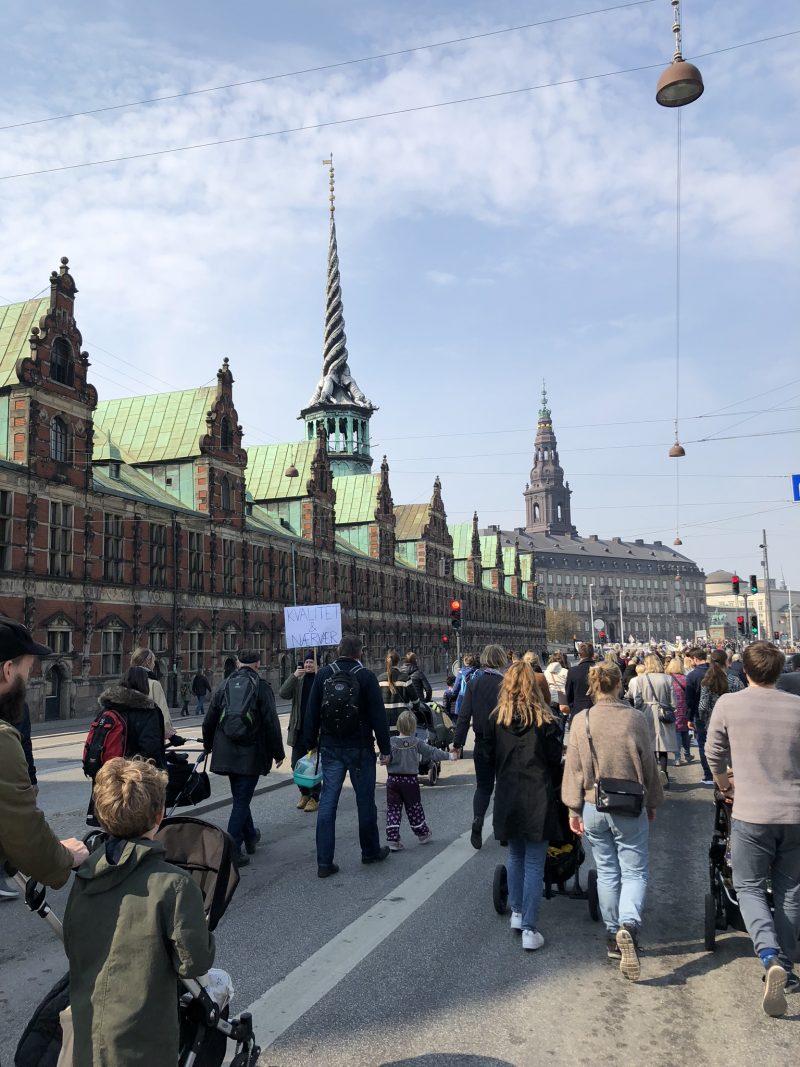 “I’m blown away right now,” says one of the protest organisers, Stella Mia Sieling-Monas. We are standing in front of the 10,000 crowd in Copenhagen. Protests are not commonplace in Denmark. Protests from parents, on this scale, are unheard of.

“The support has been overwhelming. Everyone knows that this is an issue but they haven’t known quite what to do about it. But now someone did something and everyone came out to support it,” Sieling-Monas added.

During the protest march, I speak to Saffa, who works in a kindergarten.

She is part of a team of three, who look after 22 children aged 3-5 years old. After 12pm the team becomes two.

“We statistically have more kids diagnosed with something or have a harder time coping with being in the kindergarten. We don’t have enough time to help them through the different emotions they’re going through, help them with the conflicts and help them learn how to cope with the social interactions with other kids.” 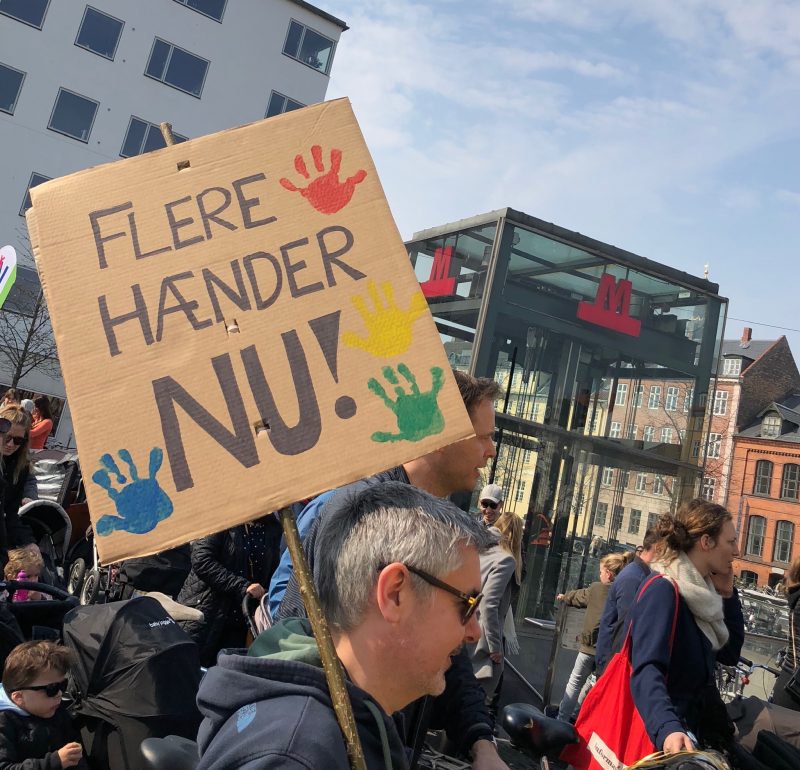 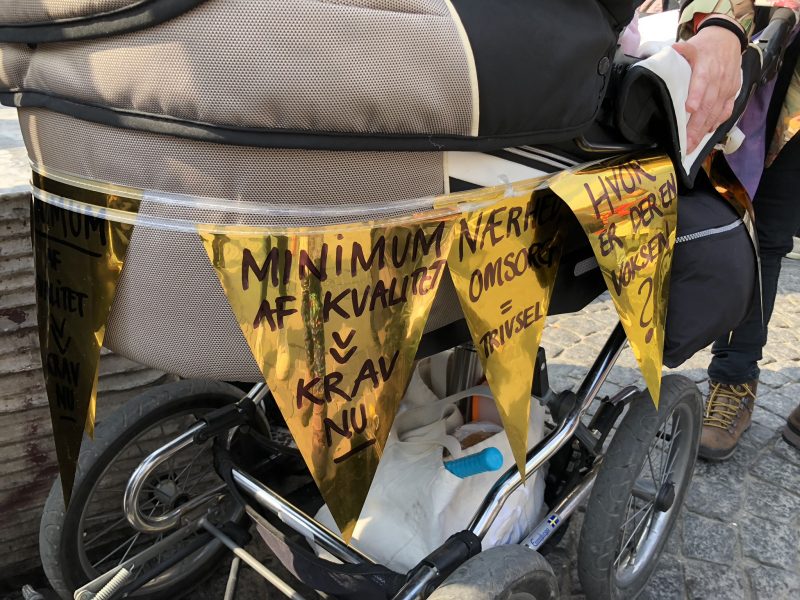 These adverse effects are being reported by child psychologists. Tina, who I meet at the protest, is one of them. She tells me that the conditions she encounters in children, such as anxiety, are some of the consequences of not having their needs met as three-year-olds.

It’s a stark contrast to the image portrayed internationally of Denmark’s enviable welfare system and happy country status. The childcare system is based on a model that makes it affordable for everyone: the Danish government pays for 75 percent of the fees, while parents pay the remainder.

Siblings have a 50 percent reduction and families on lower incomes are subsidised further. Most parents work full time and rely heavily on these institutions. They employ highly qualified nursery educators (pædagoger) and give children experiences of trips such as theatre visits, forest and outside play, independence and freedom, as well as providing organic meals.

But the union BUPL claims that government budget savings are being taken from childcare, which is affecting these staffing ratios. It reports that in 2019, savings of 280 million kroner have been directed on childcare. The union adds that in order to reach childcare standards of 2009, an extra 4,000 workers are needed across the country’s institutions.

The government has maintained that ratios in childcare institutions are generally at the minimum rate being called for, based on a survey of all municipalities by Statistics Denmark in 2017.

The Minister of Children and Social Affairs, Mai Mercado attended the protest in Copenhagen last Saturday. In subsequent comments given to media, she responded by saying it was not viable to introduce a minimum standard of staff-to-child ratios. If it was so easy, it would have been put in place by the previous Social Democrat-led government, she added.

Instead, Mercado noted the extra funds her department was allocating, to help staffing in institutions with vulnerable families. They have also set aside 2 billion kroner for childcare this year, of which 1 billion is targeted at educational staff.

Regarding poor staffing conditions in individual childcare institutions, the children and social affairs minister said this was up to each municipality and institution to better organise, and not something that could be regulated at government level.

However, on Wednesday she held a meeting with unions to discuss ways of gathering more information about day-to-day life in the institutions and how each municipality allocates its funds.

Meanwhile, stories continue to emerge about the conditions young children are experiencing on a daily basis.

With a general election this summer, childcare will be high on the agenda. It is turning into a powerful debate. 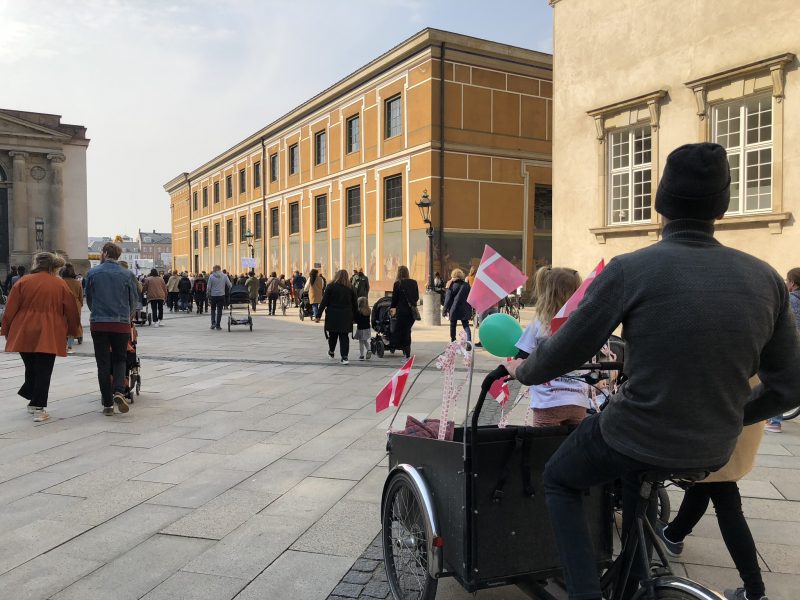 Since the first protest, three conservative parties in Frederiksberg, Greater Copenhagen have said they are in favour of the introduction of a minimum staff-child ratio in childcare institutions.